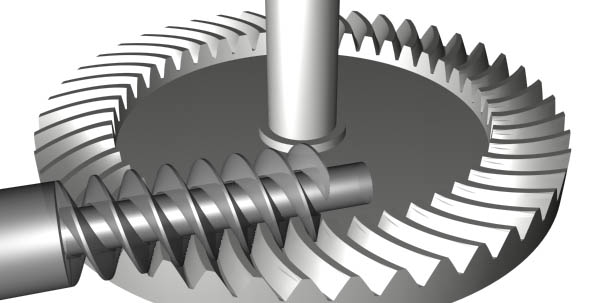 The author has developed the following tools for face worm gear analyses:

1. Calculation of 3D geometry of the gear and pinion tooth surface. Generating CAD model for CMM inspection or for injection molding tools machining on CNC

4. Calculation of undercut areas on both flanks on gear and pinion teeth.

6. Calculation of cutting tools modifications and crowning for localization of the contact pattern.

The author used the AutoLIST routine below for a simple visualisation of cutting the worm face gear.

The pictures below are the output of running the AutoLISP program with AutoCAD.

The picture shows the face view on the gear. White circules are the gear tooth face and the red lines are the generating surface of the cutting tool. The idea of the presentation is to show step by step the manufacturing process of the gears. The red cutter surface moves and the white gear blank rotates.

Each step the red cutter takes some material out of the white gear blank. The same happens during real cutting. The cutter does not have infinite quantity of the cutting blades. Each blade creates a cutting mark. There are the cutting marks on this computer model as well.

The CAD simulation shows undercut areas on the both flanks of the gear. The model on the picture is in wire frame so you are looking at the both flanks in the same time.

The digital analyses originally proposed by the author make manufacturing and design of worm face cost effective and more productive. The gear tooth surface and the contact pattern can be predicted on a 3-dimentional digital models before the prototypes are manufactured. The 3-dimentional model of the worm face gear can be used for manufacturing of the gears in CNC machines. It can be less expansive for some medium quality applications or for plastic gears. 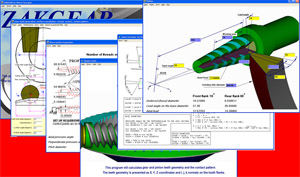